Subject: New Exhibition in MFA Boston: Chinese Song Dynasty Gallery
Posted:   August 25, 2016
Another amazing display of Chinese arts and history in Museum of Fine Arts in Boston. It is just fascinating to hear the curator talking about the difference between buddha and Guanyin and the conservator talking about the restoration of the larger-than-life painted wood sculpture, Guanyin, Bodhisattva of Compassion, which underwent a year-and-a-half conservation project before being put back on view for the first time since 1999.

Be sure to check it out.

Subject: Beyond the Screen: Chinese Furniture of the 16th and 17th Centuries

Chinese furniture reached a pinnacle of fine design and workmanship during the sixteenth and seventeenth centuries, the later part of the Ming period (1368-1644). Fine furniture of this period is characterized by restrained and elegant designs, hardwoods imported from southeast Asia, and complex joinery that held the furniture together without glue or nails.

“Beyond the Screen,” not only explored the beauty of these forms, but also carried the viewer into the physical surroundings of their time. The gallery installation evoked the rooms and courtyards of a Ming residential compound. The furniture was placed within large wooden - columned and roofed structures. Paintings and other decorative arts of the Ming period further enhanced the context of the furniture. Visitors were invited to meander along the corridors and in the courtyards, to peek into the various rooms, and to rest on the stone stools and reproduction chairs.

In the centrally located “great hall,” a handsome folding chair greeted the visitor. Tall cabinets, stools, and couch-beds, a furniture form unique to China, filled the room. A study was an essential chamber for any proper Ming gentleman wanting to project an air of erudition. Here, among restrained and unadorned tables, desks, and chairs, the scholar would practice calligraphy, write poetry, study the classics, or enjoy a game of weiqi (a Chinese form of chess). The women’s quarters, typically located in the rear of the compound, held more elaborate furnishings. A grand canopy bed with intricately carved rails of twisting and intertwining dragons graced the bedroom along with a finely carved garment rack and other furnishings appropriate to the boudoir.

The beauty of Chinese furniture can lie in great simplicity of form or in intricate carving.

In the garden, urban officials or merchants - surrounded by constructed rockeries and planted trees-could feel as if they were escaping momentarily into the venerated untamed landscape. Chairs and tables were arranged among bamboo in the exhibition to simulate an outdoor area.

Chinese carpenters frequently worked within the confines of the patron’s home. In a small carpenter’s workshop off the front courtyard, the tools and marvels of the trade were displayed. The intricacies of the complex, puzzlelike joins that hold together legs, table tops, and chair sets were explained alongside reproductions of these otherwise hidden mechanisms.

The furniture and paintings in the exhibition were generously loaned to the Museum from a number of private and public collections. Most of the objects have never before been on public view.

Subject: Tradtional Chinese Beds
Posted:   May 8, 2016
There are three types of traditional Chinese beds: daybeds, Luohan beds (beds with side railings), and canopy beds.
The traditional Chinese daybeds (榻) were used for seating at first. When the ancient Chinese found that daybed could be easily moved around, they used it as a temporary sleep bed.  Daybed became fashionable during later Ming Dynasty. Although there were various styles and shapes of daybed, they all had the features of convenience and practicality.  Instead of used as a daybed, a traditional Chinese daybed is usually used as a coffee table nowadays. The following are a few example of classical Chinese day bed: Luohan beds are beds with back and side railings. Comparing with traditional Chinese daybeds, Luohan beds are more ornamental and luxury. The railings of Luohan beds exist in many variations.  The one shows here has a three-panel screen railings.

Another one has railings made of mitred members forming geometric openwork patterns. Luohan beds can be used either as daybeds
or loveseat.

Canopy beds like Luohan beds have decorative panels on the canopy. Some of raillings and top canopy panels are simple geometric continuous pattern; some of them are ornate with elaborated carved raillings and canopy top. 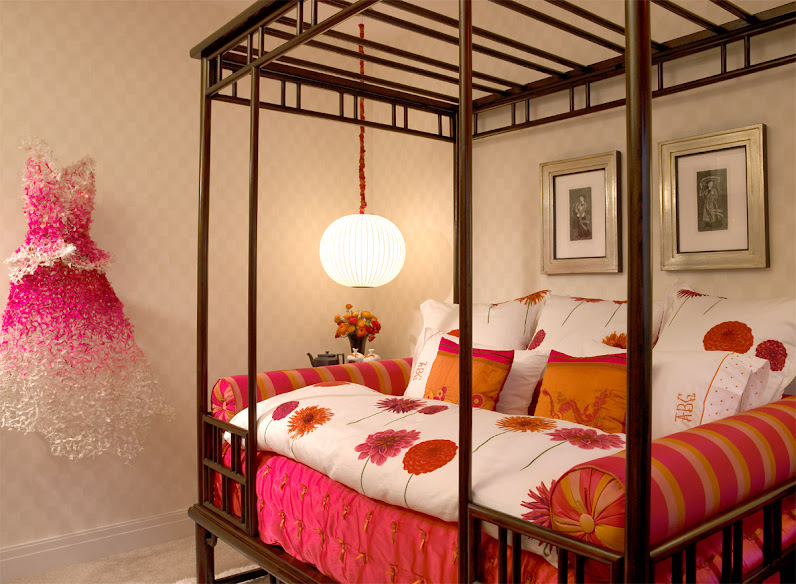 Subject:  Furniture from Ming and Qing Dynasties
Posted:   April 30, 2016
The development of Chinese furniture has a long history dating back to the Shangy dynasty over 3,000 years ago, when bronze and stone furniture of intricate designs was already made. With the change of lifestyle over the centuries, furniture developed from the mat level to become taller in height. By the Song dynasty, not only was there a wide range of furniture of all types and in various designs, the craftsmanship was increasingly exquisite, the structure was scientifically sound and the decoration were diversified. This paved the way for the acme of artistic perfection of the Ming and Qing furniture.

The development of Chinese furniture peaked during the Ming dynasty. In late Ming, while lacquer furniture was in common use, hardwood furniture become much sough-after as the nation craved antique design in their furniture. The design and making of furniture become a common passion of men of letters of the time, and Ming furniture took on a literati aesthetic dimension. Knowledgeable about the history and art of traditional Chinese furniture, these men of letters instilled into furniture making of the time such cultural elements as aesthetics, mechanics, philosophy, ergonomics and ethics. This gave Ming furniture a richer send of culture, encompassing deeper, greater and aesthetically more pleasing cultural contents. Its simplicity, archaic elegance and spirituality; its soft and warm touch without losing a sense of solemness and presence; its upright and dignified design and its well-balanced proportions, have become through the ages what scholars and researchers of later generations hail as the epitome of ‘ practical aesthetics’. As for decoration, Ming furniture tended to be minimalist in design, sometimes to the point of no decoration at all. At times drawing from plants, animals, natural scenery, or auspicious patterns as its motif, Ming furniture always gives the beholder a sense of simplicity and elegance.

Inheriting some of the style elements of Ming furniture, Qing furniture took it a step further and tended toward more splendid and elaborate decorations, incorporating various artcrafts and including intricately carved decoration and inlaid work. Whereas the form of the furniture was bulky with a sense of heaviness, the craftsmanship was refined and delicate. The development of Qing furniture culminated in the reign of Emperor Qianlong. Furniture of the time, particularly that for use in the imperial palace, was made of the finest material, representing the vary best of Qing furniture. Auspicious motifs such as the dragon, the phoenix and bats were employed abundantly not only as a show of wealth and splendour, but also with wishes for peace and good fortune. Furniture making was taken so seriously during the Qing that Emperor Qianlong was known to personally oversee its process at times. Thus the Ming and Qing furniture witnesses not only the social and economic progress of the two dynasties, but also the importance attached to furniture by the imperial courts.

This article is credited to Mr. Zheng Xinmiao, Vice Minister of Culture and Director of the Palace Museum, the People’s Republic of China. Eternal Ming Furniture published by Forbidden City Press